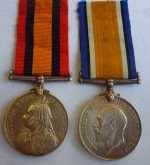 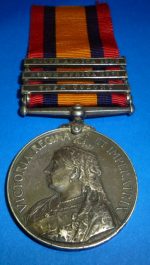 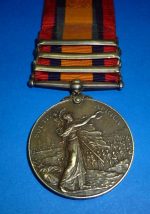 Willian Henry Baasch claimed service in a Town Guard unit when he attested into the Cape Peninsula Regiment in December 1901. He was 17 at the time. Less than a year later he joined the Cape Colony Cyclist Corps and was with that unit until he rejoined the CPR in July 1902. The CCCC was established in 1901 with a view to being used as dispatch riders. The Corps was about 500 strong. The medal is accompanied by copy service papers and a copy of a photo of a Baasch and his trusty bicycle.